Classic Cinnamon Buns are the best because they double as a dessert and a breakfast. I said it, but we have all been treating it that way. It's all good if you eat these pillows of deliciousness anytime because all they are is a regular dough with a bit of brown sugar, cinnamon and butter in the middle. What makes my cinnamon buns different than most recipes, is that I make a paste of this butter-sugar-cinnamon in the middle rather than sprinkling it on. This creates an even distribution of the flavours and it's just better ok.

So, What do you need to make Classic Cinnamon Buns?

The Gist of It:

Whenever making a yeasted gluten dough there is a step to knead the dough, before letting it rise. The purpose of kneading the dough is to work the gluten in the flour so that it becomes elastic. There are two ways to achieve this: time and movement. When you knead the dough enough it will be able to stretch when pulled, without breaking! if you can stretch it enough to see the light through it (as pictured below) you have kneaded it enough! You can knead the dough with the dough hook of your electric stand mixer (on the lowest setting) or with your hands on a counter top (by pushing the dough away from yourself then pulling it back and repeating. No matter which way you choose to do it you will look for the same result, a stretchy dough that passes the window pane test.

How do I know when the dough has risen enough?

A general rule of thumb is to let dough rise until doubled in size. You can also poke it with your finger about ½" and if the indentation remains, its good to go to the next step.

How to tell when cinnamon buns are baked enough?

I am pretty sure 99% of the cinnamon buns in the world are underbaked. If you want to ensure your buns are baked enough, bake for the time the recipe calls for and then at the end place a thermometer into one of the cinnamon buns near the center of the pan. If it reads 190°F or higher then they are done!

Can I make these cinnamon buns overnight?

Yes. Do all the steps up to forming them and placing them in the pan. Cover the formed buns in the pan covered in saran wrap in the fridge overnight. The buns will pause at this step overnight and then continue to rise in the morning when they come to room temperature. The second rise takes longer as the yeast is slow from being chilled. Give it time, it will come alive again. I would honestly just make these as written instead of putting them in the fridge overnight. If you want a soft warm cinnamon bun in the morning toss it in the microwave for 30 seconds before eating it.

Can I use another flour?

Absolutely. You can use bread flour if you like. I am a firm believer in all-purpose as it produces good enough bread on its own. But if you ever want extra fluffy bread, use bread flour! The reason for this is because bread flour has a higher protein which allows for stronger gluten development. Stronger gluten means that the bread is strong enough to maintain the big shape it got rising while it bakes and traps the air bubbles inside. It's all about protein, baby. Farmers are paid based on the protein of their wheat! Now you know 🙂

Can I use a bread machine?

If you are comfortable with your bread machine and you KNOW that it produces good bread then go for it. In my experience, a lot of bread machines just don't knead bread long enough to produce good gluten formation. However, there are many machines that do a wonderful job so you be the judge on if your specific machine is good enough or not. Follow the recipe but add the ingredients as per the instructions of your machine. Use the dough setting and then continue the recipe as written after the dough has done its first rise.

If you have leftover frosting, make Carrot Cake Cupcakes next! They use this same icing. 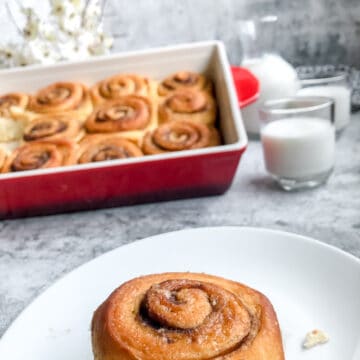